….today. Though the day isn’t over yet and there could be some reading of monumentally epic proportions on the way but I can’t see it happening. Think…think the Expendables. Are you thinking about them? Little Sly, humongous Dolph, I couldn’t do a good American accent even with a gun to my head Stratham. Still picturing them in your head? Right now here comes the awesome part. Take them out and replace them with Bruce Campbell. Yes I can see you can see where I’m going with this. In an interview with the LA Times he says….

“Yeah, “The Expendables,” or more like the “It’s a Mad Mad Mad Mad World” of horror. I want to get so many horror movie stars that people can’t possibly not see the movie. I want to give them other stuff to do. I want to have Kane Hodder be very particular about what he eats. I want Robert Englund to be a tough guy, like he knows tae kwon do or something. I want to find out the hidden sides of all these people. Some will play themselves, some will play alternate characters as well. I may approach Kane Hodder to play Frankenstein. He could be Kane Hodder himself fighting himself as Frankenstein. It could be crazy. It’s a silly concocted story that we hope to do maybe in a year or so. My breaks between “Burn Notice” have been getting tighter because they’ve been adding episodes. They’re trying to trap me like a rat in the TV world, and I might just let them. There’s a script, it just kind of blows right now, so no one’s really seeing it. We gotta work on it. Definitely shoot in Oregon all on a stage. It’s like the “300″ of horror comedies. We want to make it a whole world. Someone’s gotta take Frank down for good.”

Now you can’t sit there and not think “that is the coolest thing I have ever read”…..well you could but you’d be missing out on so so sew sow much fabulosity. And now the pondering begins as I sit here and stroke my beard in a ponderous fashion while letting out a “Hmmmmm”. There are so many horror icons that could get in on this….nay not could but should. We’ll have none of these shenanigans of individuals not wanting to be in an ensemble cast, it will be a gathering festooned with those who will make fanboys, fangirls and the aficionados squee with excitement.

Jeffrey Combs…oh dear god yes the Re-animator with his glow in the dark pointy needle though I think in this one he should be the most grrrrsome of action heros…horror hero.

As long as he gets an opporchancity to say “Booooyyyyy!!!” then Angus Scrimm is a must have. Imagine pairing him up with Christopher Lee. The spectaculosity of such a pairing might just make the cinema screen explode. Their combined ages already have them teetering on the brink of the dawn of time.

Ah who else…yes Michael Berryman…you know who I’m talking about. Pluto from the original “The Hills Have Eyes”. I think he could definitely save the day. No one would suspect him as he seamlessly blends in with the beasties from the deep dark reaches of hell.

And to bring some of the luck o’ the Irish I’m thinking Warwick Davis, though without the dodgy accent and maybe a great big big huge monstrous gun….oooh yes Old Painless from Predator. That’ll do ‘im.

But what would a good horror flick be without a vast and wondrous collection of Scream Queens to add a sense of glamour, a touch of oooh and a hit of woah.  There may not be as much screaming as there used to be but the arse kicking that’s replaced it will be pretty awesome.

I’m thinking you’d need to include Elvira in some capacity.  Mostly because…well…um….yeah I’ll admit it, it’s all about the bustyness.  A good horror flick needs some busty beauties to run away, fall over and get skewered though I can’t see Elvira being stuck with anything sharp and pointy. 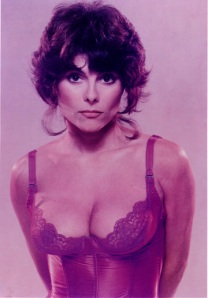 Now Adrienne Barbeau would most likely run after the big beasty and take none of brown stuff off it.  Not only that but imagine the fabulousness of any swamp bathing scenes.  I’m sure they’d be just as impressive now as they were back then. 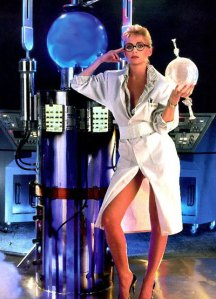 And you can always do with a smarty pants in the team to make sure all the big words are said correctly and incantations aren’t completely messed up.  So I’d go with Barbara Crampton from Re-animator and From Beyond. 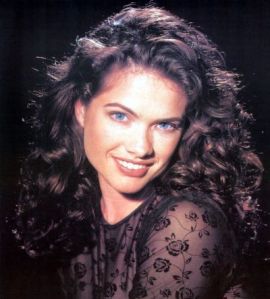 Heather Langenkamp did manage to beat Freddy not once but twice…well the second time was more of a draw but a draw is better than a loss and a loss is better than a complete tankin’ but a winner who’ll go for the win even if it means they’re going to get stuck with something pointy is just awesome.

And if there’s time Jamie Lee Curtis too.  I do think it was mostly because to not invite her to join in the fun would be rude but if she were to say no I’m sure Barbeau would take up the slack in the arse kicking department.

2 responses to “This is the coolest thing I’ve read….”